Frida Kahlo on the Dangers of Censorship 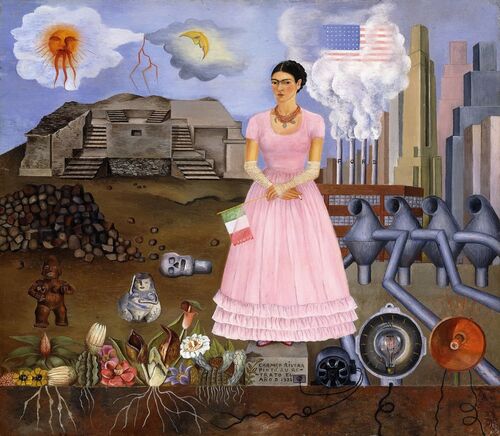 Self-Portrait on the Border Line Between Mexico and the United States, 1932.
Frida Kahlo
"Paint the Revolution: Mexican Modernism, 1910–1950" at Philadelphia Museum of Art

Not all of the letters that Frida Kahlo wrote were fiery. When sent to lovers, they were saccharine. When mailed to gallerists or collectors, they were purely logistical. But one particular note, sent in 1948 to the president of Mexico, conveyed blazing outrage—and her fierce bid to defend freedom of expression.

By 1948, Kahlo was already famous for injecting controversial, deeply personal content into her work. Her paintings had addressed miscarriage, heartbreak, and emotional and physical pain by using depictions of her own body—often splayed, bleeding, and nude—as a proxy. She’d also developed a reputation as an outspoken activist who championed Mexicanidad, a post-Revolutionary movement that celebrated Mexico’s indigenous culture, and she’d been intimately involved in Mexican politics. In 1936, she and her husband, fellow artist Diego Rivera, even convinced then-president Lázaro Cárdenas to grant communist leader and Russian revolutionary Leon Trotsky political asylum. She also personally knew another Mexican president, Miguel Alemán Valdés. 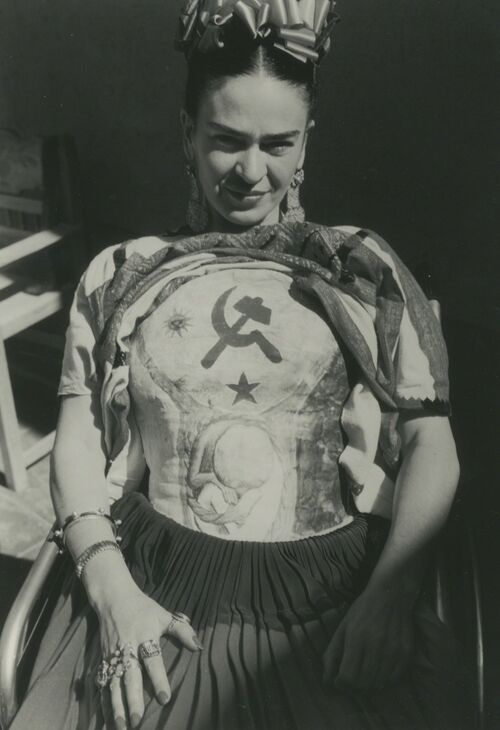 Given Kahlo’s past political involvement, Valdés may not have been surprised to receive a letter from the artist in 1948. The subject was censorship—specifically, the defacing and covering of a Rivera mural at the new Hotel del Prado in Mexico City. Measuring over 50 feet wide and over 15 feet tall, Dream of a Sunday Afternoon in Alameda Central Park (1947) featured a sprawling, chaotic tableau of Mexico’s history, from the early colonization, through two bloody revolutions, to Rivera’s present.

Controversial figures glutted the composition, but it was the inclusion of 19th-century writer, activist, and outspoken atheist Ignacio Ramírez that sparked dissent. Next to a range of figures related to the Mexican War of Independence, Rivera depicted him wielding a sign that reads “Dios no existe (God does not exist).” After the mural’s unveiling, an angry mob of Catholic students descended, scratching out both Rivera’s face and the offending bit of Ramirez’s slogan—they left the word “Dios” to linger. 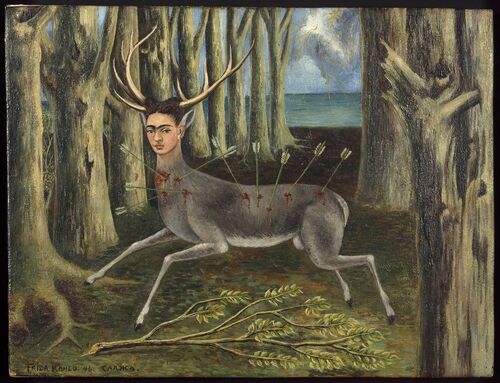 Rivera promptly restored the mural, but the protests wore on and the hotel capitulated under the pressure, masking Rivera’s work behind a wall of boards. (Rivera was no stranger to censorship; over a decade prior one of his masterworks had been chiseled off of a walls in Rockefeller Center.) While he resisted this development, it was Kahlo’s letter to Valdés that stands out as perhaps the most convincing—and impassioned—response to the controversy.

The letter launches with delightful candor. While Valdés and Kahlo had been childhood classmates, she forgoes a salutation. “Miguel Alemán:,” she wrote, “This letter is a protest…against a cowardly and humiliating crime that is being perpetrated in this country.” From there, she launches an impeccably crafted invective, appealing in particular to Valdés’s responsibility as president to defend free speech and artistic expression of all stripes. 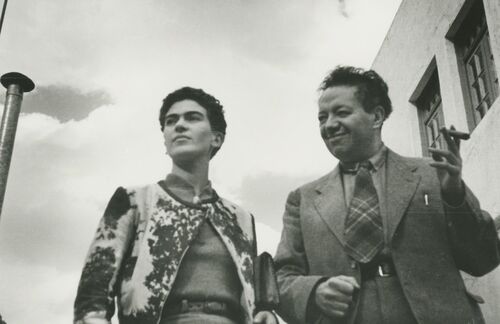 Kahlo had faith in Valdés as an even-handed, democratic leader. Just two years prior, he’d been the first civilian president (after a run of military generals) to be elected after the Mexican Revolution (1910–1920). In him, Kahlo saw a leader who would support the working class and rid politics of corruption, whether from the moneyed elite, foreign powers, or the church. In this light, she insisted that his involvement in the mural controversy was an essential democratic act—one that would impact his legacy. “I do protest, and I want to communicate to you the tremendous historical responsibility that your government is assuming by letting a Mexican painter’s work, renowned worldwide as one of the highest examples of the Mexican Culture, be covered up,” she insisted, “hidden from the eyes of this country’s people and from the international public because of SECTARIAN, DEMAGOGIC, AND MERCENARY reasons.”

Kahlo’s strategic use of capital letters crops up across the letter, including one area in which she goes so far as to accuse the president of hypocrisy. “With the right that [my] citizenship grants me, I will ask you: Will you allow THE PRESIDENTIAL DECREE THAT YOU YOURSELF ISSUED to be stepped on by a few sectarian, clerical merchants?” she challenged. “As a Mexican citizen and, above all, as President of your people, will you permit History to be silenced—the word, the cultural action and the message of the genius of a Mexican artist to be silenced?” 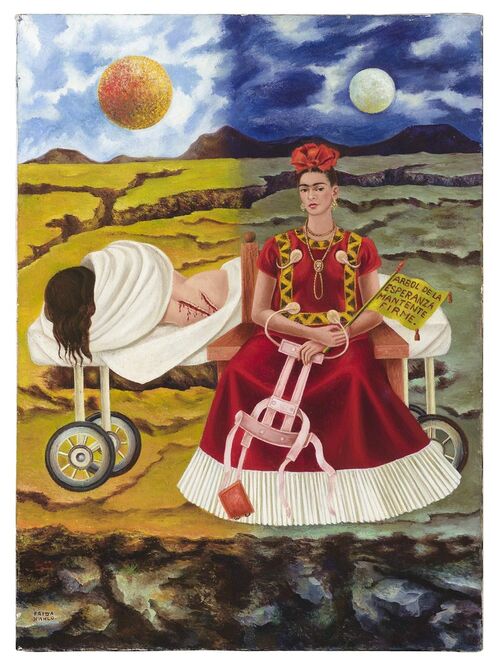 Kahlo is also careful to be even-handed herself. She acknowledges that all people are entitled to their opinion, and that art conveying a range of beliefs—both the traditional and the revolutionary, the religious and the secular—should be supported. “In democratic Mexico…we paint saints and Virgins of Guadalupe, as well as paintings with a revolutionary content, on the monumental staircase of the Palacio Nacional,” she pointed out. “Let people from all over the world come to Mexico to learn how in Mexico we respect freedom of expression!”

In 1948, the effects of World War II and the dangers of tyranny remained palpable, and Kahlo goes further to identify censorship as a floodgate for authoritarianism. “That type of crime against the culture of a country, against the right that every man has to express his ideas—those criminal attacks against freedom have only been committed in regimes like Hitler’s,” she insisted. “…If you do not act as an authentic Mexican at this critical moment, by defending your own decrees and rights, then let the science- and history book burning start; let the works of art be destroyed with rocks or fire.”

Despite the passion of Kahlo’s words, Valdés never stepped in and the mural remained covered for nine years. Kahlo, for her part, never stopped fighting for causes she believed in. Even as her health failed significantly in the early 1950s, the political content of her own paintings increased in works like Marxism will give Health to the Sick (c. 1954) and Frida and Stalin (c. 1954). “I am very worried about my painting,” she wrote in a 1951 diary entry. “Above all I want to transform it into something useful…I must struggle with all my strength to ensure that the little positive that my health allows me to do also benefits the Revolution, the only real reason to live.”

Performance Art Firebrand Anne Imhof Has Released the Music From Her Sinister Venice Biennale Work, ‘Faust,’ as an Album

A Feminist British Illustrator Who Satirized the British Middle Class